X MINUTES is a concept art work initiated by the Swiss artists Martin Schick, François Gremaud and Viviane Pavillon. It is a serie of unique pieces, whose titles are equivalent to the length of performance.

Each time X MINUTES is performed at a new venue, 5 more minutes are created at the performance site, and in the local language(s). The first performance is called 5 MINUTES, with a duration of 5 minutes, and is created and performed only at the place of the first buyer. At the second venue, 5 more minutes are added, and the second performance is called 10 MINUTES. And so on. The buyer of an X MINUTES’ performance becomes not only owner of a unique piece, but also protagonist: every co-producing performance space dedicates an object that integrated into the action of the performance. The number of performances is potentially infinite. Each step is a bit more expensive. X MINUTES is an ever growing work exploring material and immaterial values, alongside time. 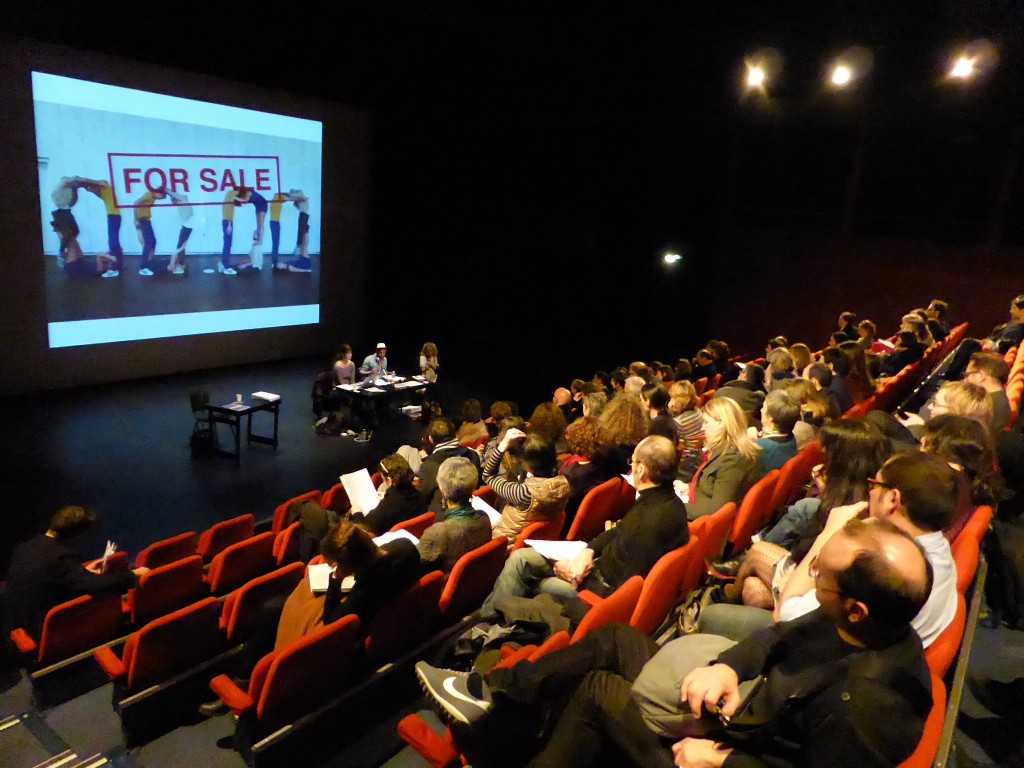 The project X MINUTES was first introduced during an exclusive auction in the frame of ‘Rencontre de danse ONDA’ in Paris on December 5th 2013 at MAC (Maison des arts Créteil) where about 100 international programmers of dance and theatre were present. The project was sold separately in singular units, while each unit can only be sold once: the buyer becomes automatically co-producer and owner. The first performance titled 0 MINUTES was given out for free to the first willing person rising the hand. The auction in Paris was limited to 30 minutes. 35 MINUTES and 40 MINUTES were sold during an auction organised at the programmers’meeting ‘Les Journées du Théâtre Suisse Contemporain’ in Brig in january 2015. 45 MINUTES were sold on eBay in May 2015.

X MINUTES follows the neoliberal logic of an exponentially increasing value: more is more! According to the contemporary art market we could claim that the more well-known, the more expensive, the more expensive, the more valuable. Our project is a critical investigation of that market logic rather than a critique of it itself. The European system of cultural production is made transparent by being integrated into the concept, and becomes the content itself. We play with the process of selling and programming, urging programmers to take a risk, and to trust and put value into the unknown.

On the other hand, the artists take the role of the independend and emancipated entrepeneur, selling their product. It invents its own system of self-sufficiency, reconsidering the co-production as the modern way of funding. It creates a kind of collaborative consumption, needful for its being and sustainability. It therefore uses the western world’s economic system in its own operation. While reflecting on the culture production we aim to reflect on the cultural product. The work itself is not only representing but also becoming an ‘oeuvre d’art’ at the same time.

X MINUTES is an ever growing show linked to materiel and immaterial values, alongside time, which is unique each time it is performed. It is a spatiotemporal travelling piece ; a show that writes and collects its own story, that contains its own archive, a travelling exhibit based on the concept of passing time, the time between each step of creation is implied and perpetualy constricted. By living and growing, the piece is becoming denser, containing an increasingly period of life in the duration of the performance. The spectators and the actors’journey through the whole experience, which brings them to arrive at the present moment, the final additional minutes, consequently deepening the feeling of being together in the present.